Santa Barbara architecture generally follows the Spanish Revival motif. This structure is largely Byzantine and Romanesque in style, although renowned architect Henry Gutterson made a few allowances to suit a Mediterranean template. Smooth masonry walls and deep red roof tiles both deviate from the patterned brick and rusticated finishes of Byzantine architecture. The Romanesque traditional influence is demonstrated in the strong structural statement, where weight and composition pervade.

The centrally planned church draws predominantly from Early Christian design elements. Representing the vault of heaven, the Byzantine dome typically rests on four naves, with an encircling ring of windows at the base of the dome for the chief source of lighting. Such windows are not present here. Instead, ascension to the central dome is impressed through subsidiary domes that demarcate interior vestibules.

Following the dome-over-square plan, the four elevations are capped with projecting gable ends. The compact Byzantine treatment of dividing windows into groups of two or three with mullion columns has been expanded. Three of the gabled projections display a set of paired stained glass windows and circular Romanesque windows sunk deep into the ribbed arches.

Clustered columns with cushioned capitals support a line of springing Roman arches, accentuating an expansive gabled portico that trails from Santa Barbara Street, with a similar arcade running perpendicular from Valerio Street. In contrast to the cross-vaulted ceiling of the Santa Barbara Street extension, the Valerio Street arcade offers a flat wood finish. Its seating capacity is 750 and can be increased to approximately 1,000 through opening the highest balcony. 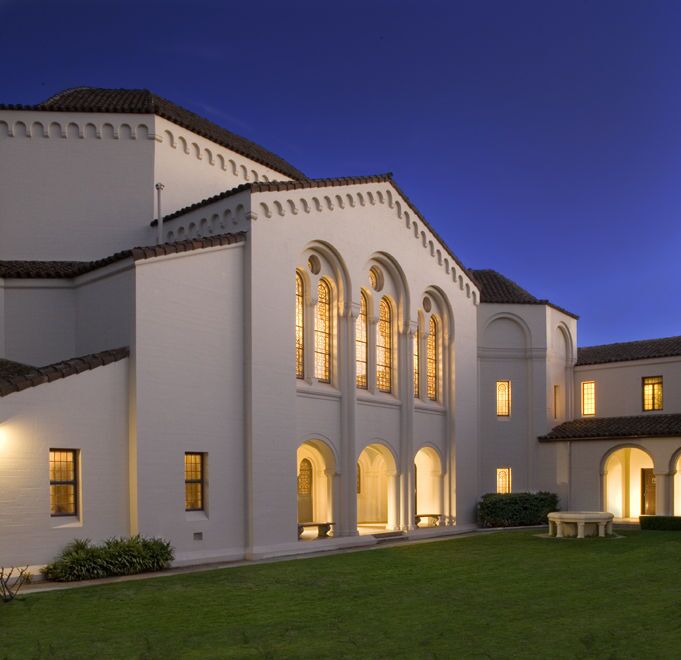